Today’s blog is the start of a series on microblading. This is one of the fastest-growing beauty trends of the last few years, so it’s natural for everyone to have questions. Over the next few weeks, I’ll hopefully answer everything you want to know about microblading.

Already in the know? Book in now!

Microblading is a form of cosmetic tattooing, but it’s unique in its method because there is no machinery involved. It’s a pen with a blade attached to it and you manually implant pigment under the skin. As there is no vibration the artist can creatively & precisely place strokes in the skin that really resembles natural hair strokes.

It is considered to be semi-permanent because of the depth at which the pigment is implanted, compared to a tattoo artist performing body art which goes much deeper. This means it will fade almost completely in around 5/6 years.

The best way to show you the difference that microblading can make is to show you a before and after: 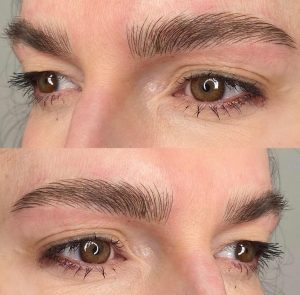 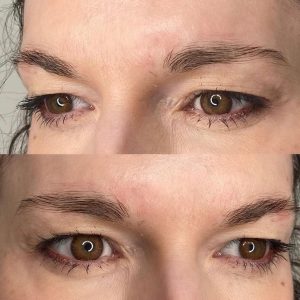 The history and development of microblading

Microblading hit the scene around seven years ago but it’s been around for a very long time. The ancient Egyptians used to use a similar method to implant pigment under the skin to create eyebrows, for example!

In those seven years, microblading has come a long way and is now a booming industry. Thousands of students now training every year. This has given me the great opportunity to pass on my skills and guide the next generation of artists by bringing them through the Browjam Academy and coaching them onto an amazing career.

Done correctly, microbladed brows should be superficial and can be changed after a year or two due to fading and shrinking. Microblading tools, techniques & pigments have come such a long way over the past few years. This has resulted in artists being able to get clients greater healed results which last longer in the skin.

This is a topic I’ll go into in more depth soon, but the overall process is as follows:

You do feel it but it’s manageable pain. You can also numb your brows beforehand. I’ve had my own brows microbladed by our very own Robyn. It’s more the noise and the thought of what’s happening that gets to people rather than the pain. But the sound is what lets a microblader know that they are at the right depth so it’s really important.

How long does it last?

This is a really common question, and it’s totally understandable. This can depend on a few factors. It can last up to five years, but you will find that most people return between one to three years later to have the colour refreshed or even redesigned due to changes in trends. It is semi-permanent so it will fade over time, but everyone’s skin is different so the rate this will happen will depend on how your skin holds the pigment and how careful you are in terms of your brow care.

I want to know more!

In the next few weeks, I’ll be doing a deep dive into microblading. I will let you know:

So keep an eye out for these!

Have a great weekend,

Call to book in now

“Building on a Brow Dream.”

Copied to clipboard!
Browse all treatments Take me there

Unfortunately we cannot offer shipping to Ukraine or Russia at the moment. Any orders placed will be refunded. Dismiss